Since 2016, H2V has been taking up the challenge of producing renewable hydrogen on a mass scale.

H2V is investing in, developing and constructing large-scale renewable hydrogen production plants to decarbonise particularly carbon-intensive sectors, such as industry and heavy-duty mobility.

Located in the heart of the Port of Dunkirk, the industrial region responsible for 21% of France’s CO2 emissions, the H2V59 project is a key addition to a major European energy hub.

H2V59: a project to aid decarbonisation of the Dunkirk area and France 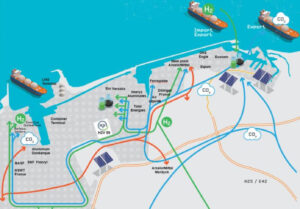 This hydrogen will be exported via a dedicated pipeline or initially mixed with natural gas. It will fuel industrial companies in the port area. In 2030, the H2V59 project may turn entirely to heavy-duty transport.

An identified annual requirement of 350,000 tonnes of green hydrogen by 2030

An investment of €1.5 – €3 billion required to decarbonise the Dunkirk industrial area between 2021 and 2030

The Dunkirk region already benefits from expertise in hydrogen production and distribution, for example with Grhyd, France’s first Power-to-Gas project, but also with hydrogen buses. H2V59 will contribute to the future emergence of a major H2 hub (production, storage, transportation and distribution).

Download the file
Back to map
We use cookies to provide you with a better user experience, improve site performance and security, personalize your content and allow us to compile visit statistics. Continue without accepting
More
I chooseI accept
Privacy

This site uses cookies to improve your experience while browsing. Of these, cookies categorized as necessary are stored on your browser as they are essential for the basic functioning of the site. We also use third-party cookies that help us analyze and understand how you use this site. These cookies will only be stored in your browser with your consent. You also have the option of disabling these cookies. But disabling some of these cookies may affect your browsing experience.
SAVE & ACCEPT