Since 2016, H2V has been taking up the challenge of producing renewable hydrogen on a mass scale.

H2V is investing in, developing and constructing large-scale renewable hydrogen production plants to decarbonise particularly carbon-intensive sectors, such as industry and heavy-duty mobility.

The H2V WN project is being carried out in partnership with GazelEnergie on the site of the Emile Huchet power station, near Saint-Avold in the Grand Est region of France. 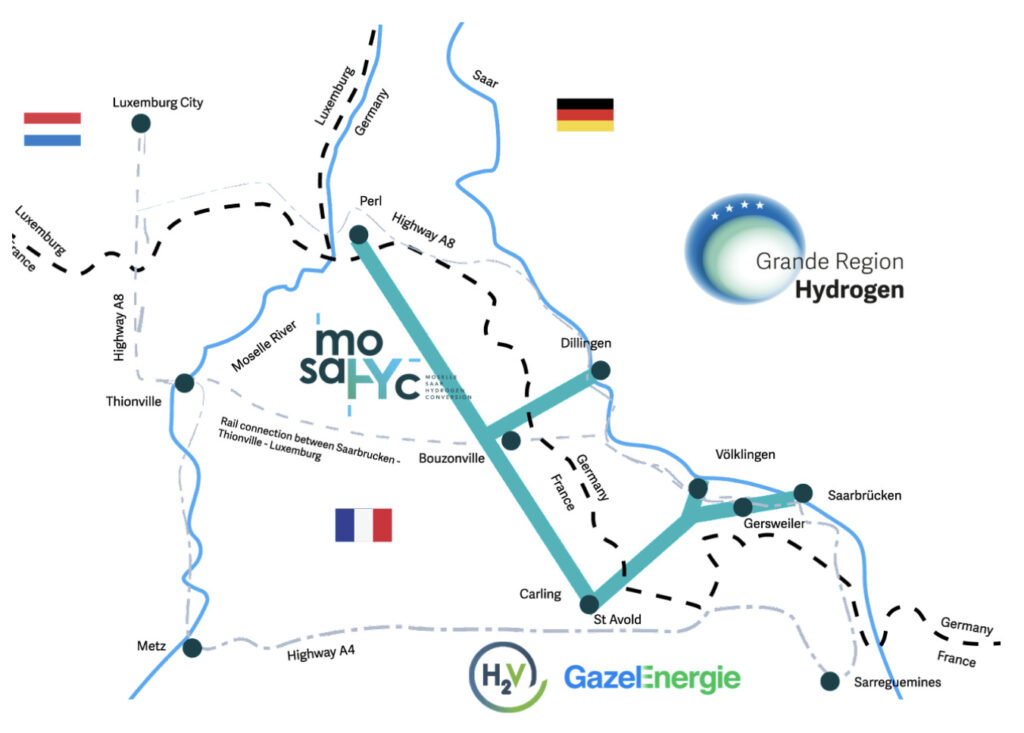 Together with its partners in Germany and Luxembourg, H2V has begun the Grande Region Hydrogen EEIG initiative (GRH), aimed at speeding up the creation of a regional hydrogen ecosystem, involving over €600 million in investment, to produce up to 61,000 T of hydrogen a year.

The hydrogen that is produced will be transported via the dedicated Moselle-Saar-Hydrogen-Conversion pipeline (known as MosaHYc) to supply fuel for the industry and transport sectors in France, Germany and Luxembourg (see diagram).

The project is part of the creation of a local hydrogen industry, supported by a regional agreement.

The H2V WN project is in a key strategic location in terms of transport, at the crossroads of 2 Trans-European Transport Network corridors (TEN-T Corridors). It is also close to one of France’s four navigable inland waterways. There are many established industries in the area. The renewable hydrogen that is produced will supply fuel for heavy-duty transport and local or cross-border industry.

Download the file
Back to map
We use cookies to provide you with a better user experience, improve site performance and security, personalize your content and allow us to compile visit statistics. Continue without accepting
More
I chooseI accept
Privacy

This site uses cookies to improve your experience while browsing. Of these, cookies categorized as necessary are stored on your browser as they are essential for the basic functioning of the site. We also use third-party cookies that help us analyze and understand how you use this site. These cookies will only be stored in your browser with your consent. You also have the option of disabling these cookies. But disabling some of these cookies may affect your browsing experience.
SAVE & ACCEPT